Housing Officer is Council’s Employee of the Year 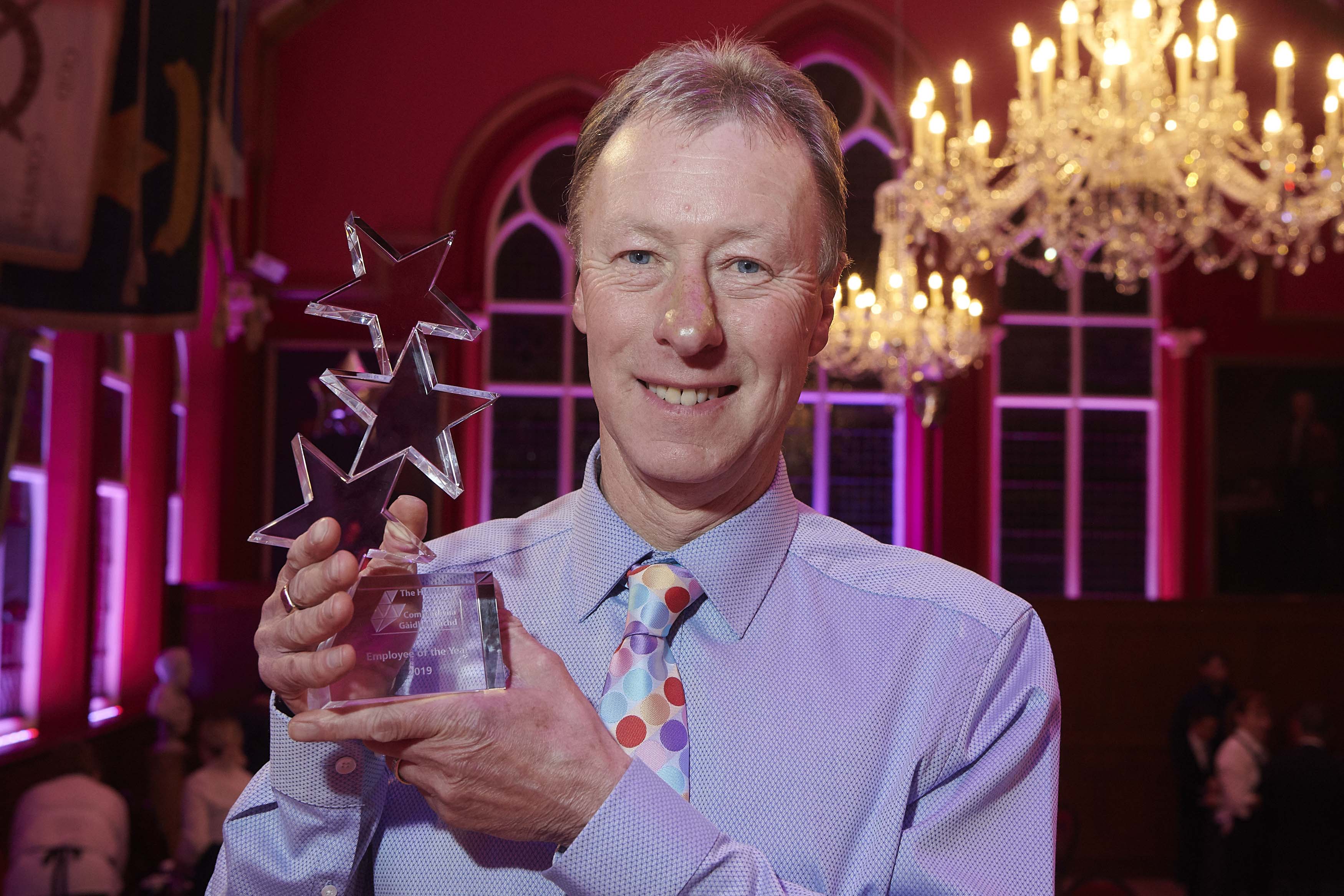 Employee of the Year 2019 Ron Archer

A long serving Housing Officer who has worked tirelessly to ensure tenants are given the support they need is The Highland Council’s Employee of the Year.

Ron Archer has been a Housing Management Officer working in the Inverness team for 30 years and during this time has provided support to many individuals and families to help them through what can often be difficult and challenging times in their lives.

The introduction of Welfare Reform and Universal Credit, has led to an increase in workload and the complexity of cases. Ron, though has made it his priority to ensure tenants are given the assistance they need to cope with these fundamental changes. His dedication and drive means he has also made strong links and networks with third-sector agencies, Housing Benefit colleagues and other support agencies.

Housing Manager Sandra MacLennan who nominated him said: “Ron shows genuine commitment, care and compassion. He is the kind of person who will always go the extra mile to help tenants and his work colleagues, in fact, anyone who asks for assistance. He is always there to provide support and to help to find a solution.”

Ron’s drive goes beyond his normal work remit. It is not unusual for him to help tenants in his own time cutting grass, helping them move, and keeping in touch with them to make sure they are settled.

An Inverness tenant said: “My Mum passed away from cancer when I had just moved into my house. Ron helped me so much at such a sad and difficult time, I don’t know what I would have done without his help. Every time I contact Ron he is able to help me, I can’t tell you how much I appreciate that.”

Ever resourceful, after a recent accident left him unable to drive for a short time, Ron had no qualms about getting on his bike to cycle to his visits as he did not want to let tenants down.

His care and compassion also reaches out to the wider community and he has been a volunteer with the Highland Blind Tandem Club for 31 years.

He was presented with his award by the Leader of the Council, Cllr Margaret Davidson and Nitesh Jain from WIPRO during a ceremony held last night in Inverness Town House. The Awards, were sponsored by Viridor, Hub North Scotland, Zurich Municipal, Morrison Construction and WIPRO.

Runners up were Vicky MacDonald who works at Inverlochy Primary in Fort William as a Pupil Support and Children’s Services Worker and Fiona Emslie, a Learning and Development Adviser.

Vicky’s job focusses on emotional wellbeing and learning support. She runs a daily walking bus and breakfast club with a warm smile and welcome for everyone, helping to set pupils up for the day, and giving them the time and opportunity to discuss any worries they have. Thanks to her constant warm and encouraging presence, absence rates for targeted pupils have improved over the past session.

Deputy Head Teacher Tanya Ross says: “Vicky’s naturally nurturing nature leads her to always be looking out for others. All our pupils and staff value her highly and we feel lucky to have her in our school.”

Fiona Emslie is a Learning and Development Adviser and has worked in the Council’s Modern Apprentice Programme Team since last January.

Fiona supports candidates through their apprenticeships, leading them through from induction to completion, quietly encouraging them to keep on track.

Paul Whitham who nominated her says: “Fiona is a highly valued member of the team, a supportive colleague and an excellent role model. Without her none of the 157 apprentices would be where they are today. She is a true professional.”

Communities across the Highlands were invited to nominate Council staff who they felt deserved special recognition and the first Community Award of the evening went to Community Payback Officer Jamie Sinclair who was nominated by Golspie Community Council.

The community council has received a lot of assistance from Jamie and his workforce – from grass cutting and the clearing of vegetation along the Big Burn path network, to the painting of benches and other practical projects around the town.

Secretary Anne Ford writes: “Jamie carries out his work in a quiet, efficient way. He has great empathy and builds up a good rapport with people, making sure all work is completed to a high standard. We want to thank him for his important contribution to our town.”

John Graham from the Community Council says: “Alan has always acted promptly and effectively to our requests. We know that if he is tasked with a repair it will be carried out in a timely and effective manner. He is a credit to the Council and it gives us great satisfaction to recognise his support to this community over many years.”

In praising her work Kenny Maclean from the Community Council said: “Katrina has quite simply been a star, especially over the last 12 months while we have been battling illegal dumping in lay-bys. Anything we ask of her, she has always responded in a timely manner. We all think she is a credit to Highland Council.”

Digital Support Officer John Grieg was named Trainee of the Year. John joined the Council as a Youth Trainee earlier this year and completed his SVQ in IT and Telecommunications in just 8 months.

As well as having a real enthusiasm for the world of IT, John has shown great ability, a high professional and personal commitment to his job and a drive to learn.

He is now a very valued member of the team and has moved from a temporary trainee post to a full time position.

The Team of the Year Award went to the Council’s Fleet Hire and Travel Desk team who are responsible for the arrangement, administration and purchase of business travel and accommodation so staff can carry out their duties

Last year the team dealt with over 6,000 travel requests and have consistently demonstrated an ethos of improving performance; of being successful at implementing change and very effectively delivering service improvements. They are now developing a number of projects including a change in the way hire vehicles are insured which has the potential to save the Council upwards of £80,000 a year.

Teams of Council staff were invited to enter projects into four categories and all short-listed entries were assessed by an independent judging panel. During the Award Ceremony, the four category winners were announced. The winning team projects for the following categories were:

Just Ask Enquiry Line – A dedicated multi- professional phone enquiry line for children, young people, parents, carers and those who work with them. Since August this team has responded to over 300 calls. This is a new, affordable, and very efficient way of delivering a service which is highly rated by users and is unique in Scotland.

Deaf Awareness – At Macdiarmid Primary and Nursery on the Isle of Skye staff now have a qualification in British Sign Language which they teach to all the children to enable the deaf learners to be fully included in school life. In raising deaf awareness, the school has created a passion for sign language and is providing a quality learning environment for everyone, including the wider community.

Dingwall Service Point and Relocation – The team behind the project have delivered efficient use of space and resources, strengthened partnership working and improved accessibility to services for local residents.

Placement Services Change Programme – This is a project focussing on returning young people to the Highlands from costly out of the area placements. In the last year, 40 children have returned or been able to remain in the area, avoiding costs of over £6 million.

The Convener’s Award went to the Reducing Staff Travel project which has achieved £400,000 of savings last year and is on track to deliver a further £175,000 of savings to the Council this year.

The 2019 Outstanding Partnership Award went to a joint project between the Child Protection Committee and the University of the Highlands and Islands which saw Visual Communication and Design Degree students develop material for Child Sexual Exploitation campaigns to target young people across the Highlands.

New to the Council’s Quality Awards this year were two Awards sponsored by the Chief Executive Donna Manson. She presented the Staff Kindness and Care to Colleagues Award to Sharon Bailey a Business Support Officer with the Care and Learning Service. Not only does Sharon perform her job at an exemplary level but she demonstrates a real commitment to all her staff and colleagues, especially when it comes to their wellbeing.

Her team credit Sharon for creating a more open and supportive culture and describe her as “a valuable asset” who always listens non-judgementally and is a great role model.

The second new Award, Kindness and Care to the Public went to the Corran Ferry team who operate the most reliable and busiest single vessel route in Scotland, carrying over 250,000 cars each year.

The crew provide a year-round regular service 7 days a week and go above and beyond to support the communities relying on the service. They all display lots of goodwill and do whatever it takes to keep the service running. During peak periods this involves ditching the timetable and instead operating a non-stop shuttle service to meet demand.

Speaking at the end of the night the CEX Donna Manson congratulated all staff and thanked them for their hard work. She said: “Our Quality Awards are a fantastic opportunity to recognise all the excellent work going on and celebrate success. It has been a real privilege to come together to share so many great examples of projects going on right across the Highlands that really are making a difference. There is a lot of work taking place which is not only achieving significant financial savings to the Council, but is leading the way nationally and reinforcing our reputation across Scotland as a forward-thinking and very pro-active local authority. As the Chief Executive I am very proud of all our staff and have nothing but high praise for their hard work and commitment.”

Compere for the evening Kirsteen MacDonald, a former pupil from Central Primary and Millburn Academy who received her education primarily through the medium of Gaelic, graduated with an Honours degree in Gaelic Language and Media Studies, from the University of the Highlands and Islands. Since then she has carved out a successful career with the BBC. At the end of the evening Kirsteen expressed her congratulations to everyone. She said: It’s been a pleasure to be able to share this opportunity to highlight some of the truly inspirational and ground-breaking work you do.

“I think your pioneering spirit, the creative way you address challenges, your commitment, professionalism and hard work shines through and I wish you all continued success in all you do.”

Brought to you by (link)